While several have been asking for me to publish my understanding of the festival dates of the 2018 biblical calendar,   I need to point out that according to the written prophetic scripture there is no agency on the earth at this time that has any biblical authority to declare the biblical calendar with authority.   Ezekiel 44:15-24 (esp. vs 23) declares that a time will come when YHWH will reinstate the authority of a restored Zadok priesthood in the millennial age who will have His authority to declare His sabbaths and biblical calendar, and we look forward to that time, for then the current ages of mankind will be over and our Heavenly Melchizedek will return to be with His remnant in His restored Garden of Eden!

Thus at this time we can only go by our best studies thus far of the injunctions and clues of the written scripture, together with the magnificent added insights from the ancient historical exiled (by the Pharisees around 180-160 BCE ) Zadok priesthood as they recorded them in the Dead Sea scrolls.

Since being discovered in 1948,  the Dead Sea scrolls were kept locked under great controversy by Jewish and Christian theological academics until a new sincere scholarship was able to gain access them from around the year 2000 which ensured their eventual release for public study. When we understand  how much the Zadok testimony reveals about the ancient biblical calendar, we can understand why the institutional  judaeo-christian theological academics worked so hard together to keep the scrolls hidden away for 60 years – which in my view is probably the greatest academic scandal of the century.  The  Zadoks claimed that the corruption and departure from the Biblical calendar is the essential foundational indicator of all that is rebellion against YHWH.  The Zadoks testified to the authority of Gen 1:16, a Divine creation solar-star biblical calendar based on the authoritative declarations of  the sun and the stars, and not the moon – and only they would know since they carried the lawful authority of YHWH and duty to guard and declare His worship calendar. 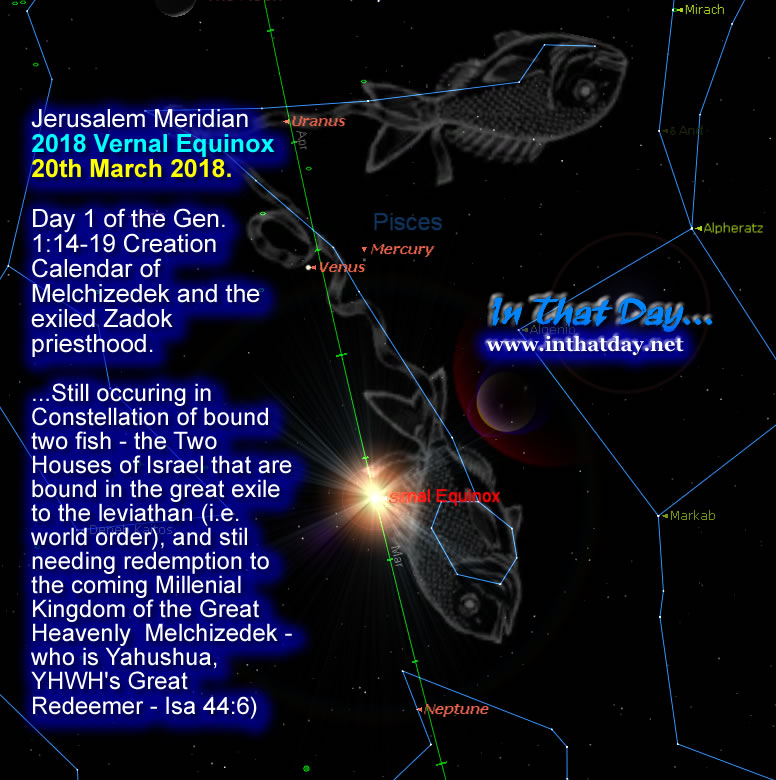 Download our current perspective of the Creation Calendar for 2018. This calendar which Yahushua observed, according to Apostolic accounts of the timing of events that occurred at his final Passover which contrast Yahushua’s last Passover against the Rabbinic Passover that in that specific year occurred the evening following when Yahushua and the Apostles observed their Passover, due to the single day incidence gap that occurred between the solar-star calendar and the Rabbinic lunar calendar calculations in the year 30 CE. The incidence of the proximity timing gap of a single day that occured on 30 CE and did not occur in any other year between 27CE and 34 CE, can be observed today from good astronomical simulation software such as Starry Night Pro.

Blessings in  Yahushua who is our Heavenly Melchizedek!

Iconic One Theme | Powered by Wordpress